It was a chilly snowy day in western NY as you never know what March will dole out. The giant snow piles of 2015 are almost gone, good thing as we needed parking space. Even though the weather was still poor thing were ramping up fast for the year. We had greater response than expected for attendees to our planned afternoon DOT forum presented by Srgt. Schramm of the NYS police. Plan was to open up space within the store to hold this but it became evident there was just not enough room to do both. The shop techs had to start extra early this day to complete their scheduled work, clean up and set up for 60 some attendees.

This worked out well as our evening session was planned like this anyhow. Coffee and other hot drinks along with popcorn, donuts and soft drinks were offered to all. This entire event and all supplies courtesy of Davis Trailer World and NYS Police. 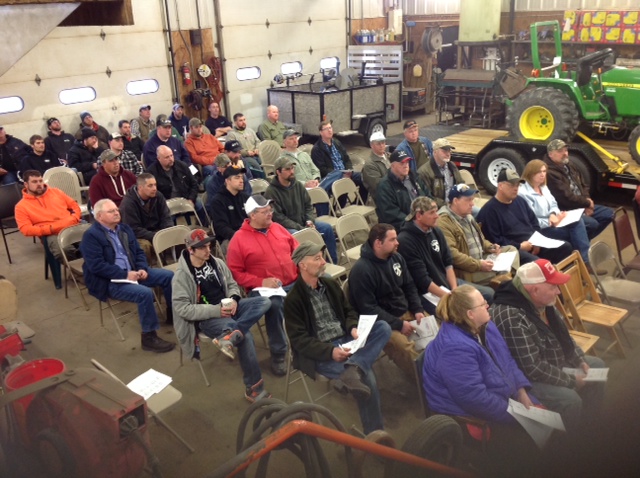 At 1:30 in the afternoon the session began. Topics covered dealt with type of carrier (private or commerce), License requirements of operator and at what weights these change ( class A,B, C, D ) driver record keeping and hours of service(log book & Pre trip inspection) These sound simple but can become rather complex. This portion lasted about 1.5 hours and many questions were asked and answered by Sgt. Schramm. After a short break we covered equipment, ratings and required devices of both power unit (truck) and trailer. Again this varies widely by weight and class of operation. Sgt. Schramm spent a full hour on these topics, again many questions were fielded.

The last section covered load securement. We had 2 trailers with equipment loaded on them. something’s were correct and some not. This was intentional. Sgt. Schramm explained direct vs indirect tie down, working load limits of various tie down equipment. How to properly handle combustible materials hauled and proper connection (hitching) of truck to trailer.

The group was very attentive, loaded with questions and a desire to learn. Although we may not all agree with the laws and rules at least we know what they are. We all have the choice to follow them or ignore, it’s just a matter of the consequence. There are a couple of simple reasons I believe in this type of event and are willing to sacrifice my time money and efforts. The line “nobody told me that” I become tired of hearing, the question “how are we supposed to know that” well this is how. All of this information is available from state and federal web sites. Also this educates myself and my staff to help guide our customers. Getting the right product, components and knowledge are all part of our task when filling an order.

At 6:30 pm we got into our evening session and covered all the same topics. Several people waited to talk with Sgt. Schramm and myself to go over certain “gray area” topics. It was a very long day , finally locked up just after 11pm. As we have done for the last several years there are more of these to come in the future. In the meantime please feel free to call, if I don’t know I should be able to find out or direct you to someone that does.